Memorial Day Weekend Book & Movie Review on X-Men and Godzilla. AKA...everyone is entitled to my opinion.

I hope everyone had a wonderful and safe Memorial Day Weekend, because I did, and I'm about to talk about it. And I mostly don't want to sound like I'm bragging.

I didn't go hang with my parents this weekend because I hate being on the roads when 36.1 million other people are on the roads, too. Other people's driving tends to piss me off and make me curse more than normal. I just really don't need that kind of stress in my life (and I'm afraid someone's going to read my lips in their rear view mirror one day and go all Solange Knowles on me), so I just stay home do the other three things in my top four of the "Things that make me happy and that I'm good at" list. Number one is "hanging out with my parents and being spoiled, even at my age." Two through four are "read a book until it screws up my sleep cycle," "Sleep as hard and long as a poisoned/be-spelled Disney princess" and "Watch movies."  This weekend was all about two through four.

Saturday, Sunday, and Monday I slept, read, slept, ate some donuts, and then repeated the whole routine. The book I read was Daisy's Back in Town by Rachel Gibson. I THOUGHT it was going to be the literary equivalent of a rom-com movie with Reese Witherspoon. Ya know, West Texas girl comes back to her hometown and falls in love with her high school sweetheart all over again while wacky hijinks ensue? Well, not so much. There were no hijinks, both of the romantic leads were mostly unlikable, and speaking as a West Texan, the stereotypes of West Texans were just insulting.

Today I took a vacation day to extend my holiday and to go to the orthodontist. (I dare to live on the edge.) (I need a sarcasm font.) Anyway, after taking my turn in the Chair of Orthodontic and Financial Pain, I grabbed some lunch (Freebirds - in an homage to my carefree college days) and then headed to the movies. Just like I don't care for holiday traffic on the roads, I don't care for holiday traffic in the theater, so Tuesday movies when everyone else is back at work make me very happy. And it's all about me, dammit.

I started with a large Diet Coke and a ticket for X-Men: Days of Future Past in 3D at the theater on the west side of town. Before I get into my brief review of the movie, let me just say that during the summer movie season of Memorial Day Weekend through Labor Day weekend, I enjoy the previews almost as much as I enjoy the actual movies. I have added a few flicks to my "must-see" movie list today.

Back to X-Men, it was awesome. Thanks to the all-star cast comprised of both generations of X-Men actors, it had the best of both X-Men worlds. The story was well-paced; the 131 minute running time didn't feel that long at all. In my not-even-a-little-bit humble opinion, Days of Future Past is better than X-Men: First Class, and I LOVED First Class.

My random thoughts from X-Men: Days of Future Past:
As soon as X-Men was over, I stopped at the ladies room (large Diet coke + 2-hour movie is rough), got in the car and headed to the theater on the other side of town rather than wait an hour to watch Godzilla at the first theater. I got my ticket for Godzilla in 3D, another large Diet Coke and a small popcorn with do-it-yourself butter. I totally had to break out the Spray 'N Wash when I got home because I can't be trusted with do-it-yourself butter. But I digress...

Godzilla, like X-Men, is a two-hour movie, but where X-Men was exciting and didn't FEEL like a two-hour movie, Godzilla felt like a four-hour movie shown during dental surgery. It was not particularly good. Actually, I thought it was particularly bad. Multiple times during the show I lost interest and pulled out my phone to check Facebook (I was the ONLY person in the theater), only to remember that "I paid $8 for this crap so I should at least watch it." The single reason I sat through the entire movie despite the second large Diet Coke of the day was Aaron Taylor-Johnson. He grew up really nice. And before you get on me for being pervy over a not-quite-24-year-old guy, just keep in mind his wife is 47. I'm practically a puppy compared to her.

My random thoughts from Godzilla:

Anyway,that's the weekend in review. Time for us to tackle a whole new week. Hope yours is more X-Men than Godzilla.
Posted by Shelley J at 8:22 PM 8 comments:

They should put a common sense section on the SAT.

I've mentioned before that I work at a college. Our students are, hypothetically, smart enough to have passed the SAT or ACT. Sadly, that doesn't mean that every student who manages to make it to college comes to campus with at least some common sense rattling around between their ears.

Today I worked at the front counter. I have a container full of pens for students to use and (usually never) bring back. These are pens with the office logo on them. They are all identical.

This morning, a student grabbed a pen, took his paperwork into the lobby and then came back to me. He said, "this pen doesn't work." I held my hand out for him to give the pen to me to throw away, but he put it back in the pen container. I said, "WAIT! Which pen was it so I can toss it?" He said, completely seriously with no hint of sarcasm, "the red one."

So, I guess what I'm trying to say is that if students were required to take a high school class on common sense, and  were tested on common sense after high school the same way they are tested on math, reading, and writing (we could call it the IHECSTNDMTDT - aka the I Have Enough Common Sense To Not Darwin Myself To Death Test), and were required to have passed the IHECSTNDMTDT  to get into college, I would have had nothing to blog about today.
Posted by Shelley J at 12:55 PM 5 comments:

Chillin' out, maxin', relaxin' all cool

I'm sitting on the couch, sangria in hand, singing the theme song to "The Fresh Prince of Bel Air."

I expect TLC to contact me saying they want to turn my life into a reality show any minute now.


I have seriously slacked on the blog lately. I blame HBO. I’ve signed up for a 3-month trial package, so I’ve been watching HBO Go and HBO On Demand every spare minute. I've absolutely got to watch everything before I have to cancel because the trial price goes away and the regular price kicks in. But I’m not here to talk about HBO (even though I could write an entire post about series quality, excellent writing and how they like showing naked women but are less interested showing naked men. Unless it’s Hodor. They gave us full-frontal Hodor. Nobody needs to see full-frontal Hodor.)

The family next door consists of a dad (who isn’t there much), a mom (who can't not yell even if she wanted to), a 4-year-old little girl...aka…Elsa (who’s actually pretty cute and sweet) and a toddler boy…aka…Demon Child (who is still not talking in full sentences, but who has a wicked low-pitched Vincent Price-style laugh that is pretty creepy to hear late at night. And since his parents don’t impose any kind of bedtime, I hear it late at night REGULARLY.) I refer to them as THE NEIGHBORS. (I know, zero points for originality.)
Now that you know THE NEIGHBORS, let me set a few scenes:

Scene 1: Flashback PRIOR to Disney's Frozen being available on DVD…Elsa is on the sidewalk singing what she can remember of the lyrics to “Let It Go.”   {musical notes}  LET it go. Let IT go. Let it GO-OWHOA-OH-OH.” She sang this line over and over and over.  But then the DVD came out, so NOW she knows all the words, to all the songs, and all of the dialogue of the whole movie. I’ve never actually seen Frozen, but I know most of it just from listening to her through the walls. (And I totally want to build a snowman.)

Scene 2: Demon Child is kicking the wall. Over and over. I go next door and let the mom know he’s  kicking hard enough to rattle the pictures on my walls. She turns around and tells the kid to stop kicking the walls or “I’m going to let this lady take you away.”(Clearly she’s making empty threats since the Universe has told me to never have [or take away] children.) He burst into tears. And then he proceeded to start kicking the wall again. And he laughed the Demon Child laugh the whole time. (FYI: I doubled my renter’s insurance after that.)

Scene 3: Mom is singing “Let It Go” from Frozen. Elsa interrupts her with, “Mom. MOM! Stop, you’re ruining it!”  I kinda like Elsa. 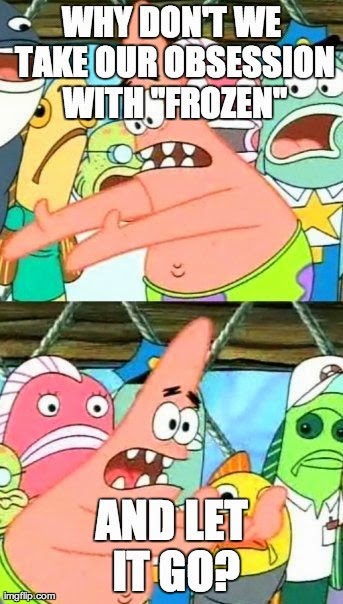 Scene 4: Demon Child yells “YEEEEEE HAAAAAAAAAWWWWWW!” And then I hear a loud crash. (I tripled my renter’s insurance after Hop-a-long Demon Child.)

Scene 5: Mom tells Demon Child “NO!” He apparently has never heard that word before because he cried for FOUR HOURS STRAIGHT after she said it.

Scene 6: Moms YELLS at Demon Child to “USE YOUR INDOOR VOICE!” 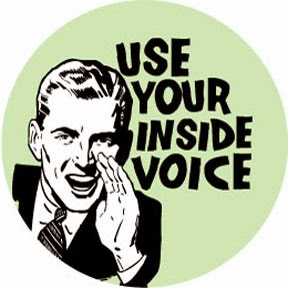 Hmmm. It really loses some of the humor in the telling. Oh well, clearly THE NEIGHBORS’ dialogue doesn’t compare with the scripts on HBO, but it certainly is entertainment that’s less expensive than a premium cable package. And on the good side, it also doesn’t involve Hodor’s package either.

p.s. Admit it, some of you are disappointed I didn't add a Hodor pic. Cheeky buggers.