So, a Facebook post and consequent discussion with my friend Kristi got me thinking on a billion dollar idea... 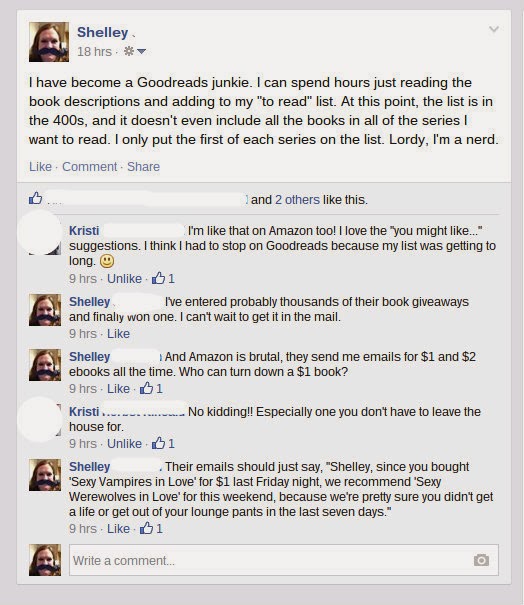 Later, I realized that in addition to browsing the titles in Goodreads, I also really like the social aspect of it. You can read a book, rate and review it, and discuss it with others. And on Amazon, like Kristi mentioned, I like the "you might also like" feature (although, I am REALLY glad they don't send emails like the one I suggested above). And then, the light bulb went on...

"I should create a dating website for book nerds!"

Yes, you read that right. Online dating for bibliophiles. It would take the bookiness (totally a word) of Goodreads, mix it with the relentless sales drive of Amazon and sprinkle in a little bit of Match.com.

Can you see where I'm going with this?

Users would sign up and create a profile that includes rating and reviewing at least ten books (to sort out the non-serious readers). Their customer emails would go something like:


Genius, right? Because I know that I suck at flirty chit chat, but I can discuss books with the best of them. In this scenario, I might even be able to claim that I've got some game (assuming it's even possible for a middle-aged woman to have game. Please tell me it's possible.)

Anyway, I've already started thinking up clever names for the site. Or at least I've tried to. All that I've come up with is "LitMatch.com" but I'm afraid that would attract pyromaniacs rather than book lovers. Anyway, I really want to make this happen. Now I just need to find someone who can create a website and write complex algorithms. Hmm, I suppose I need a computer nerd. Guess I'm going to have to start hanging out in the Dungeons and Dragons section at Barnes and Noble. *

*This is not an insult. My dear Vin Diesel plays D&D and even wrote the foreword for the 30th anniversary D&D book.
Posted by Shelley J at 7:12 PM