Anyone have one of those bean bag things that you can stick in the microwave to warm up and use as a heating pad for sore muscles? I used to have one. It was wonderful. I would nuke it up then put it between the sheets at the foot of the bed to warm my feet on cold nights. Did I mention it was wonderful?

And then. Then it wasn't wonderful. Then it was awful because one night back in January I nuked the bean bag just a little too long. I didn’t realize it at the time, but one of the beans inside turned into a tiny ember. And then I put that tiny ember (and the cloth bag it was in) under the covers and crawled into bed.

Usually when I would do my foot warmer trick, the bean bag wouldn’t be warm anymore after 30 minutes or so, but I would typically be asleep by then. That night, I woke up coughing two hours after I had crawled in bed and my feet were still warm. “Strange” I thought, and rolled over to go back to sleep. But I couldn’t stop coughing. I coughed and coughed...enough to wake myself up to “almost-functional” status and to I realize that my feet were more than just warm. They were hot. Like, really hot. And where was that smoke coming from?

And then I finally REALLY woke up. I jumped out of bed and yanked the covers off, and sure enough, my bed was on fire. The ember in the heating pad hadn’t turned into raging flames, but it HAD turned into a nice smoldering fire that burned its way down through the topper of my mattress and into an almost perfect circle about 6 inches wide and 3 inches deep. 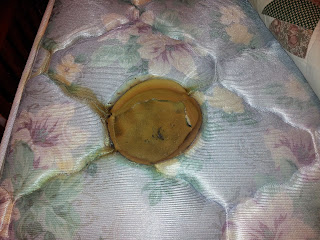 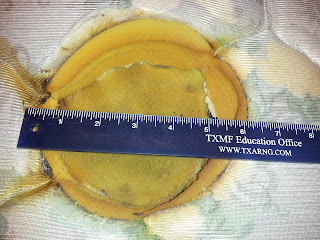 Now, throwing the covers off the bed made the smoke go from “pretty much contained under the blankets” to “wow, get me a disco ball and some glow sticks and I could totally throw a rave in here - no smoke machine necessary.” Despite the smoky haze, the smoke detectors in my apartment didn’t go off even once. I was actually grateful for that because at that point it was 3 am. I wasn’t too concerned about waking up the neighbors (because they wake me up all the time), but I was worried that someone would call 9-1-1 and the firemen who showed up would be hot (in the yummy sense of the word, not in the actual fire extinguisher sense) and they would see what a complete idiot I was. Clearly my priorities need work.

Anyway, if you’ve stopped laughing, you might be wondering how I put out the fire. Well, as always, I had stopped at Sonic that night. Just before bed I had filled up the Route 44 cup with ice water and put it on the night stand. I didn’t even hesitate to grab it when I realized I had a fire to deal with. I just yanked the lid off and poured. Whoever says Sonic isn’t a life saver can just shut the hell up.

Ultimately, everything turned out fine. I had to throw away some bedding and seriously air out the apartment (you can buy Febreze in bulk at Sam’s), but I didn’t get rid of the mattress. I just let it dry out (44 ounces is ALOT of water) and then flipped it over. I had completely forgotten about the 6-inch-wide and 3-inch-deep hole until I flipped the mattress back over yesterday when I was changing the sheets. (No, I didn't go five months without changing the sheets.)

At this point, my mom is reading this and worrying about the smoke detectors not going off. Don’t worry, Mom, I remembered to have the apartment maintenance guy come fix them. I told him I had seriously burned some toast and the alarms didn’t go off. (Liar, liar, mattress on fire. I know.)

Why am I telling this story now, six months later? First, like I said before, I remembered it when I flipped the mattress yesterday. Second, because enough time has passed that I’m more amused by it than mortified. And third, I just remembered I have this sign hanging in my apartment: 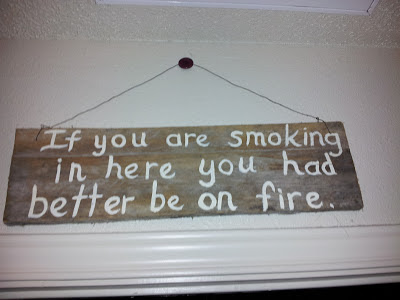 Irony is a bitch sometimes.
Posted by Shelley J at 7:16 PM